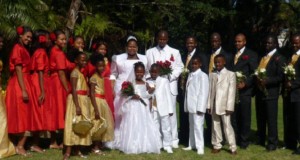 Another special treat for Choir fans (long overdue–I’ve been meaning to add these for a few months now): Founding choir members Sipokazi Nxumalo and Linda Nxumalo were married on January 10, 2009 in a beautiful ceremony in SK’s hometown of Port Elizabeth. In attendance from the Choir were Sipho (Linda’s best man), Zanele, Mandla, David [...]

I’ll Remember You is a Bob Dylan song released in 1985 on his Empire Burlesque album. Lyrics: I’ll remember you When I’ve forgotten all the rest, You to me were true, You to me were the best. When there is no more, You cut to the core Quicker than anyone that I knew. When I’m [...]

Soweto Sounds: Pride (In the Name of Love)

Originally released by U2 in their 1984 album The Unforgettable Fire, Pride (In the Name of Love) is about Martin Luther King, Jr. and is one of the band’s most recognized songs. The Choir’s interpretation of the song is unique with all the usual SGC style. Great song! Lyrics: One man come in the name [...]

Here’s a special treat for SGC fans: Long-time choir members Zanele Ngcamu (née Mkhwanazi) and Sipho Ngcamu were married September 20, 2008 in a beautiful ceremony in Soweto. Zanele has been gracious enough to share with SGF some photos from their special day. Check them out below–looked like lots of fun! [...]

Mama Tembu’s Wedding is one of my favourite SGC songs that was performed by the Choir during their Blessed Concert encore (circa 2005-2006). It’s such a fun song and a hidden gem! Half the fun is watching the Choir dance and perform to it! Written by B. Egnos, the song was made popular by Margaret [...]

PBS Art Beat by Mike Melia December 18, 2008 Listen to the interview with Sipokazi. Dressed in vibrant costumes, the Soweto Gospel Choir blends the rich sounds of traditional African music with dance and a variety of musical genres — rock and hip-hop, and American gospel and R&B — and the combination has earned the [...]

Taken from kimmelcenter’s photostream. Photos from the Philadelphia concert on December 10, 2008. [...]

The Grammy-winning, and newly nominated, Soweto Gospel Choir comes to the Kimmel tomorrow in musical ministry. By James R. Sanders Philadelphia Inquirer Dec. 9, 2008 Voices raised to the rafters, and the heavens, the Grammy Award-winning Soweto Gospel Choir spreads its ministry through song. Since its founding in 2002 in Soweto, South Africa, the choir [...]