Deborah Myburgh The South African August 9, 2010 The Soweto Gospel Choir raised the roof yet again in London in Cadogan Hall last week, bringing with them, as always, their incredible spirit, passion and an immense amount of African soul. Enthralling from beginning to end the show was even more enhanced with the inclusion of [...] 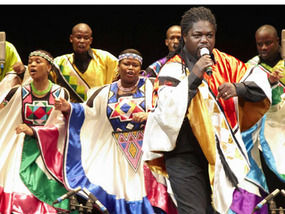 Friday August 6,2010 By Simon Gage Daily Express AS THE Soweto Gospel Choir sway into the auditorium in outfits so dazzling they would make Joseph’s Amazing Technicolor Dreamcoat look a bit beige, little do we know we’re in for a delicious feast of music from all over the world, not just their native South Africa. [...]

By Jim Ruggirello April 14, 2010 Long Beach Gazettes Town-News That was fun. You couldn’t imagine a livelier, more enjoyable show than the one put on by the Soweto Gospel Choir at the Carpenter on April 1. No foolin’. The group is from South Africa, obviously, and they brought to the Carpenter stage and a [...] 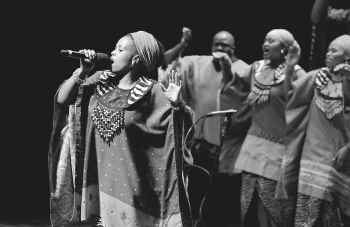 March 23, 2010 The Dallas Morning News Manuel Mendoza Soweto Gospel Choir could easily extend its name to include “dance troupe” and “percussion group.” Rhythms and movement routines were as crucial as vocals as the multitalented entertainers put on a dazzling show Sunday at Winspear Opera House to close the 2009-10 TITAS music series. The [...]

Concert Review of Soweto  Gospel Choir at the First Presbyterian Church in Seattle, WA March 12, 2010 Peggy Oliver The Urban Music Scene For less than a decade, The Soweto Gospel Choir have blessed the music community and encouraged the masses with their potent mix of Western and African gospel traditions.  Their performances across the [...]

March 12, 2010 Elaine Reviews Comments Off on The Soweto Gospel Choir Live in Concert

By Rob Hubbard Twin Cities Pioneer Press March 7, 2010 While athletic trainers have developed workouts that tone up as much of your body as possible, what do you do when your entire being needs a workout? Not only your body, but your soul, spirit, heart and mind. Well, if you weren’t at Minneapolis’ Orchestra [...]

By Katie Potzick February 22, 2010 Louisville Cardinal I have gotten e-mails from the Student Government Association about student tickets for concerts at the Kentucky Center for the Arts many times in the past, but have never felt persuaded to buy them until the Soweto Gospel Choir decided to stop in Louisville. The Soweto Gospel [...]

By Kate Reynolds and Cheryl VanBuskirk The Bulletin February 17, 2010 The sweet sound of South African harmonies could be heard ringing throughout Annenberg’s Zellerbach Theatre last Saturday evening with a performance from the Soweto Gospel Choir. Performing before a sold-out audience, the choir returned to the Annenberg after making its Philadelphia debut there in [...]

By Michael Huebner The Birmingham News February 14, 2010 Saturday, Alys Stephens Center Four stars out of five The South African choral tradition, spread from Christian missions to mine workers toiling in deplorable conditions, has persevered into the 21st century. Ladysmith Black Mambazo brought it to the world’s attention in the 1970s. The Soweto Gospel [...]