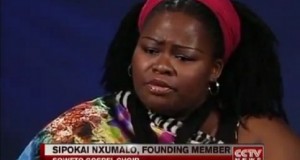 The Soweto Gospel Choir were featured in a news segment on CCTV9 (China, English channel). To experience the sound, mood and energy of South Africa from the comfort of your own home, look no further than the music of the Soweto Gospel Choir. The 26-member singing group has won two Grammys and received nominations at [...] 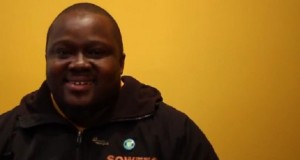 We’ve always claimed to be the anti-world music website, but we’ll make exceptions for acts as dope as the world-renowned Soweto Gospel Choir. We caught up with Shimmy Jiyane, Choir Master/Choreographer/Singer and founding member of the group last Friday at Symphony Space in NYC. Shimmy and his crew have travelled the world with their “African Grace” [...]

March 6, 2012 By Kaylyn Hlavaty The Post The two-time Grammy Award winner and Oscar nominee Soweto Gospel Choir is a group of not only singers but performers also who are leaving an impression on audiences around the world. On Tuesday, the choir will perform at 7:30 p.m. at Templeton­Blackburn Alumni Memorial Auditorium. The event [...] 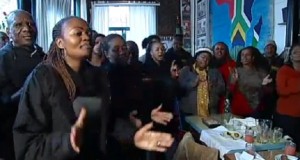 By: Cheryl Wills NY1 March 4, 2012 They hail from South Africa and they are known for their electrifying performances. The Soweto Gospel Choir, which was formed 10 years ago, has been on a steady global tour. The 52-member choir recently made a stop in Brooklyn to get some down home food at Madiba, a [...]

By Rosalind Bentley The Atlanta Journal-Constitution March 3, 2012 With two Grammys, an Emmy, an Oscar nomination and performances with Bono, John Legend and Peter Gabriel among others under its belt, you might get the impression that the Soweto Gospel Choir was around long before apartheid crumbled 18 years ago. But the South African choir [...]

Sharing their songs from Soweto 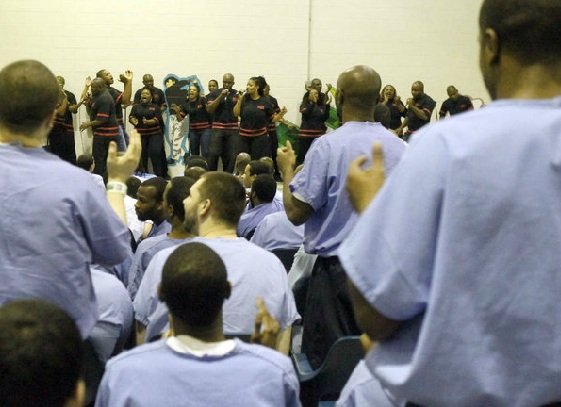 By Kia Gregory March 1, 2012 Philadelphia Inquirer They have raised their stirring voices before Nelson Mandela, the Prince of Wales, and Archbishop Desmond Tutu. They have performed with Diana Ross, Bono, and Celine Dion. They have sung lush harmonies and danced to traditional rhythms at Carnegie Hall, the Sydney Opera House, and the Royal [...]

March 1, 2012 Elaine Articles, Photos, Videos Comments Off on Sharing their songs from Soweto

By: Victoria Ahearn The Canadian Press February 22, 2012 TORONTO – Soweto Gospel Choir member Bongani Ncube gives a warning before rhyming off some of the illustrious recording artists the renowned South African group has worked with over the years. “If I start counting, I won’t finish,” he said with a laugh in a phone [...]

February 15, 2012 Elaine Articles Comments Off on Sounds of Soweto Gospel Choir at Tilles

By Larry Truong Gainesville Scene February 2, 2012 Only one gospel choir in the world has performed with Bono, Aretha Franklin, the Red Hot Chili Peppers, Josh Groban, Celine Dion and John Legend. It’s an ensemble that has been featured on “The Today Show,” “The Tonight Show with Jay Leno” and “Late Night with Conan [...]

January 26, 2012 By Kelsey Meany Gainsville inSITE The Soweto Gospel Choir, a seasoned bunch of soul-singers, is coming to Gainesville to perform at the Curtis M. Phillips Center for the Performing Arts on Feb. 3. The two-time Grammy and Emmy award-winning choir from South Africa is touring the United States from January to April. [...]