Hi everyone, Heads up to Australian fans that several members of the Choir will be in Oz this week to do promo for the Soweto Gospel Choir’s upcoming tour in May. Choir members making the trip: Matshepo, Shimmy, Vusi Sr., Sibongile, Gregory, Sipho, Zanele, Sipokazi and Vusi Jr.. I can share that they will be [...]

The 2011 Grammy Nominations have been announced, and the Soweto Gospel Choir are up for one solo category with their Grace album and are part of two additional categories with Christopher Tin. The categories are: Best Traditional World Music Album [Vocal or Instrumental.] Pure Sounds – Gyuto Monks Of Tibet I Speak Fula – Bassekou [...]

He came…they saw him…he conquered! The ‘Mozart of Mumbai’, A.R Rahman, together with a slick, professional cast of over 35 talented performers, set the Sun City Superbowl alight, as he stepped out for the first show on the South African leg of the A.R. Rahman Jai Ho Concert: The Journey Home World Tour’, on Saturday [...]

November 22, 2010 Elaine News Comments Off on A.R. Rahman Sets his Sights on Durban

Guests in Rome can expect to see some of the finest choirs in the world at the Roma Gospel Festival. The event will be kicking off with a bang on December 19th 2010, with the Soweto Gospel Choir taking to the stage at the Parco della Musica. This South African group may be familiar to [...]

July 30, 2010 Elaine News, Schedule Comments Off on Soweto gospel choir to perform with The Bala Brothers

The Soweto Gospel Choir performed on Good Morning America today. They sang the classic Pata Pata. Unfortunately, the video is no longer available at the GMA website 🙁   [...] 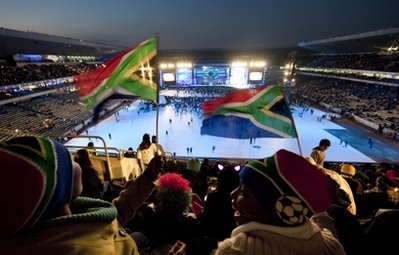 The kick-off concert is underway.  Watch is live here. Elo’s Play by Play: 2:05pmET: Hugh Masekela takes to the stage and is joined by Lira for a resounding version of the Makeba classic Pata Pata. 2:10pmET: SA President and FIFA President on stage. 2:15pmET: Black Eyed Peas on stage now.  Where is the Love? segue [...]

It is with a heavy heart that we share that Soweto Gospel Choir member Isaac Molefe (aka DJ) has passed. More info about what happened is in the article below. What a tragic tragedy.   I would like to extend my deepest condolences and prayers to DJ’s family and friends. Also, to the entire Soweto Gospel [...]