When it comes to vocal talent, Africa, and more particularly South Africa, has spawned the most evocative sounds on earth and still produces the very best that the world has to offer in this art form. Soweto Gospel Choir is that very best. 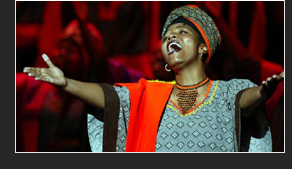 Expect earthy rhythms, rich harmonies, acapella numbers as well as accompaniment by an exciting 4 piece band and percussion section. Add to this, energetic dancing and vibrant, colourful costumes, and the mix is awesome. This young dynamic choir performs both traditional and contemporary music, adding its own unique feel and interpretation to both. The choir performs in 6 of South Africa’s 11 official languages.

This magnificent 52 strong, choir, styled with a contemporary feel, leaves all who hear it stunned with emotion. It is small wonder that they are charting a meteoric rise to international fame. Those that saw the 46664 Concert in Cape Town 2003, under the auspices of former President Nelson Mandela, will have witnessed Soweto Gospel Choir in action alongside other musical greats like Bono; Queen; Anastacia; Peter Gabriel; Jimmy Cliff; and the Eurythmics. 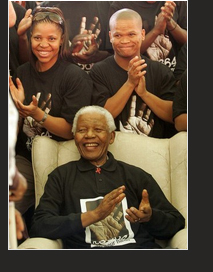 Formed only in November of 2002, by promoters/presenters Andrew Kay, David Vigo and Clifford Hocking, in association with Executive Producer/Director Beverly Bryer and Musical Director David Mulovhedzi, Soweto Gospel Choir’s five year existence has become an overnight, multi award-winning sensation. In 2003 they won a Helpmann Award, Australia’s prestigious Performing Arts Award for “Best Contemporary Music Concert”. In May 2004 they won the 2003 American Gospel Music Award for “Best Choir”, in October they won the 2004 Gospel Music Award (also US based) for “Best International Choir”, and locally, their debut CD Voices From Heaven was nominated for a SAMA Award for “Best Traditional Gospel”. This CD has also garnered rave reviews, having reached the Number 1 spot on Billboard’s World Music Chart, within three weeks of its US release, debuting at Number 3. Their new CD Blessed was released in July 2004, through Universal Music.

Wherever Soweto Gospel Choir has performed, be it Europe, Singapore, Australia, the UK or the US it has wowed audiences. At the Edinburgh Festival it was the top selling show, with a fully booked season and five star reviews. It was listed as the critics’ choice in all major publications. In September 2004 Soweto Gospel Choir performed three concerts at the Royal Festival Hall in London, followed by a countrywide UK tour. In November/December of that year, the choir completed a sell-out tour of Spain, followed by performances in Berlin, Stuttgart and Hamburg. The choir completed a two-month, 39-city tour of the United States in April 2005, with the majority of concerts (many at over 2,000-seater venues) sold out. Soweto Gospel Choir returned to the US in 2006, 2007 and is already booked for 2008! 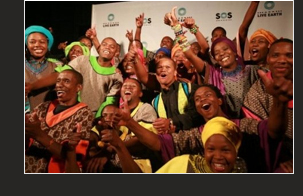 In June 2005 the choir performed in Athens and Spain, followed by a sell-out performance at St Paul’s Cathedral, as part of the prestigious London Festival. In July they performed their “Voices From Heaven” show for the first time in South Africa, at the Nelson Mandela Theatre in Johannesburg, before returning to New Zealand and Australia in August where they toured their new show Blessed extensively around both countries, to exceptional reviews and audience reaction.

The next highlight of their short but amazing career was a guest appearance with Diana Ross, Deborah Cox and Danny K for the “Unite of the Stars” Gala Banquet in November last year, in aid of the charities Unite Against Hunger and the Nelson Mandela’s Children’s Fund. Soon afterwards they departed for performances in the Caribbean and Germany, returning home at the end of December. In January the choir left for Bermuda followed by a three month tour of the US where they performed for President Bill Clinton at a corporate function in Little Rock, Arkansas. They were invited guests on NBC’s “Today Show” as well as “Late Night with Conan O’Brien”, both a special honour for any artist. The choir returned to South Africa in April for ten performances of their “Blessed” show at the Johannesburg Civic Theatre, dazzling both reviewers and audiences. Soon after their local performances in April 2006, the choir departed for a 5-week tour of the UK, including two sold out concerts in London. They followed this with a tour of Spain and a month’s season at the 2006 Edinburgh Festival where they were one of the top selling acts, earning 5 star reviews. The choir also joined Johnny Clegg as his special guests for his “One Life” show at the Johannesburg Civic Theatre in July, playing to full houses and reaching new audiences during its two week run. 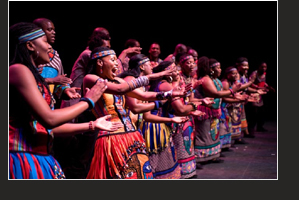 Another exciting and memorable occasion for the choir, was at Sun City on New Year’s Eve, where they performed for Oprah Winfrey and 200 of her V.I.P. guests, including Mariah Carey, Mary J Blige, Tina Turner, Patti Labelle, Sydney Poitier and Quincy Jones.

On 11 February 2007, Soweto Gospel Choir received probably its greatest accolade, a Grammy Award for the cd “Blessed”, in the category “Best Traditional World Music”. They were also nominated for the 26th International Reggae and World Music Awards, held at the Apollo Theatre, Harlem, on 5 May, in the category “Contribution to World Music” alongside Jimmy Cliff, Salif Keita, Youssou N’Dour and Ziggy Marley. In April this year, the choir won a 2006 SAMA in the Category “Best Live Performance dvd” and in November they added to their string of awards by winning the 2007 Metro FM Award for Best Gospel Album for their latest album “African Spirit”. On 9 December, they were nominated for a second Grammy Award in the Best Traditional World Music Album, for “African Spirit”!

26 members of the choir left for a three month tour of the US and Canada in January, having begun this tour with a guest appearance on “The Tonight Show with Jay Leno’, the highest rating late night talk show in America, so an immense privilege for the choir. While in New Orleans, they recorded a track with rock legend Robert Plant, to be included on a tribute album of Fats Domino songs, with proceeds going to the victims of Hurricane Katrina.

The remaining 26 members performed at the CAF Awards in Ghana on 1 March, followed by sold-out concerts at the Adelaide Festival, the Hong Kong Festival and in Korea in mid March. They then travelled to Mauritius to sing at Sol Kerzner’s daughter’s wedding, alongside top US gospel star Bebe Waynans. In March they performed in Adelaide, Hong Kong and Korea and in July they sang for former President Nelson Mandela and Kofi Anan at the 4th Annual Nelson Mandela Lecture in Johannesburg

In June this year, Soweto Gospel Choir was one of the supporting acts for the Red Hot Chili Peppers at their concerts in Germany, followed by a featured appearance at the London Festival and performances throughout the UK, as well as in Sweden. They then returned home for their first national tour in September, premiering their third show “African Spirit” to enthusiastic audiences in Johannesburg, Cape Town, Durban and Port Elizabeth.

On 1 December, World Aids Day, the choir joined a host of top national and international musicians for the third 46664 concert held in South Africa, this time in Johannesburg. They performed with music greats Peter Gabriel, Corinne Bailey Rae, Angelique Kidjo, Johnny Clegg and Danny K amongst others, as Ambassadors for this worthy Aids initiative.

But no amount of glittering international recognition and praise has diverted Soweto Gospel Choir from the mission it holds close at heart. In 2003 the choir founded its own aids orphans foundation, Nkosi’s Haven Vukani. With the plight of South Africa’s sick and impoverished top of mind, their foundation supports families and organisations that receive little or no government support. These destitute families and children rely on Soweto Gospel Choir to sing all over the world for very much more than their supper. To date, the choir has collected over R3million for their foundation.

Soweto Gospel Choir is honoured to have as its patron, Archbishop Emeritus Desmond Tutu.