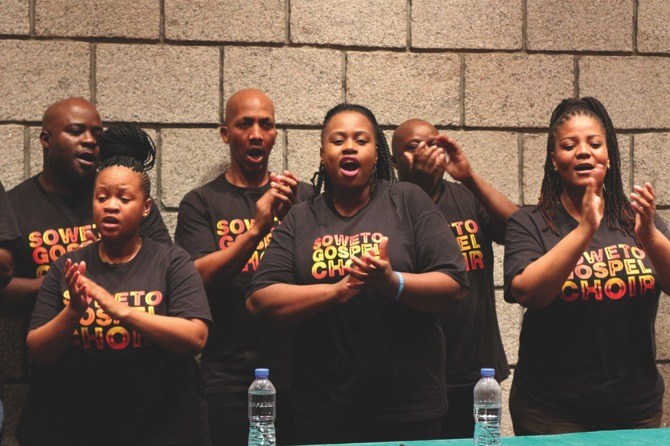 The Choir brought 20 members of its 54-person strong choir to its concert last night – the group’s first ever in Macau – which featured songs from across its 15-year repertoire.

Gospel is a genre of Christian music, which can date its roots back to the late-18th century. By the 20th century, the expansion of the Zionist Christian Church in Africa had led to the popularization of gospel choir music, especially in South Africa where the victims of the former apartheid system found solace in the music.

In 2002, music producers Beverly Bryer and David Mulovhedzi recruited choir members in Soweto, a township remembered for its resistance to, and formed the Soweto Gospel Choir.

As might be expected, the late South African president and anti-apartheid revolutionary Nelson Mandela is considered a hero by the choir members.

“When we speak about Nelson Mandela, we are speaking about an idol; a person who fought for South Africa and someone who was very influential in helping the youth to consider politics and education in general, ” said Shimmy Jiyane, choreographer and choirmaster of the Soweto Gospel Choir.

The choir members said that although they all came from different parts of South Africa, a love of gospel music bound them together. They said that growing up with such music in the home had influenced them from an early age.

But by no means was their experience unique; it is a cultural norm spread throughout South Africa’s very culturally and linguistically diverse society.

“South Africa is very diverse and has a rich historical background. All of us grew up in different churches, but with a love of gospel [mutual] to all of us,” explained Jiyane, speaking on the musical genre’s cultural significance.

Today, the Soweto Gospel Choir brings together talented singers from across South Africa and tours the world with its gospel music. It combines traditional songs of different South African cultures and performs in many of the country’s 11 official languages.

The choir has received many prestigious awards including two Grammy Awards for Best Traditional World Music, and an Oscar nomination for Music (Original Song) with Peter Gabriel, for their song, “Down to Earth”, from the animated film Wall-E.