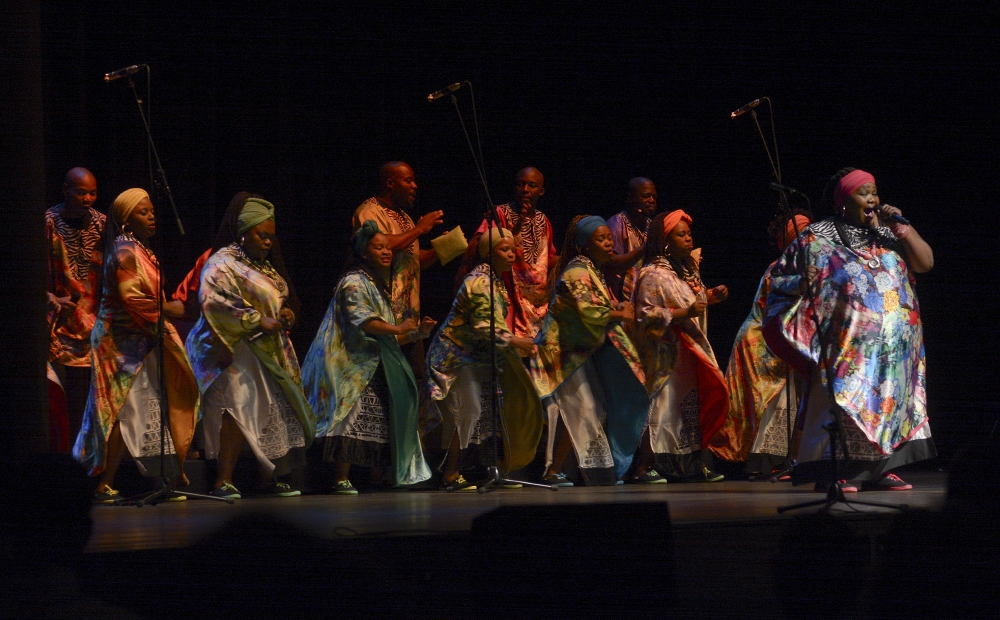 The Grammy award-winning Soweto Gospel Choir greeted its audience Friday in the IU Auditorium by saying hello in four of the 11 official languages of South Africa.

The choir was formed in 2002 and has since traveled all over the world.

It has performed at Carnegie Hall and the Sydney Opera House, toured with the Red Hot Chili Peppers in Germany and Celine Dion in South Africa and was the first South African group to perform at the Academy Awards.

The group has also made appearances on “The Today Show” and “Late Night with Conan O’Brian.”

“I want to showcase my talent as an artist, and the choir was the best option,” director and choir master Shimmy Jiyane said. “We travel all over the world, and everyone can see what I can offer.”

The internationally acclaimed group used the whole stage, constantly moving to the beat or bringing individuals to the front for a brief showcase of intricate footwork before melding back into their base position of two lines.

“It was electrifying,” University Information and Technology Services employee Michael Morgan said. “What I’m mostly surprised by is the amount of dance, and the level at which they dance is unbelievable for as old as they are. I couldn’t even imagine dancing like that.”

The choir members’ dynamic movement to both traditional tribal drumbeats and classic tunes like “This Little Light of Mine” was accentuated by their brightly-patterned costumes.

Jiyane said the men’s tunics and women’s dresses and head wraps, no two of which were the same neon color, were derived from traditional South African dress.

“The costumes are beautiful,” audience member Caitlin Whittaker said. “They add to the visual aspect of the performance.”

Both the visual and auditory presence of the choir had the entire audience tapping its feet, clapping along and giving the occasional whoop of appreciation by the end of the show.

The choir members interacted with each other onstage, feeding off one another’s energies as they traded off melodies and movements.

The group uses its onstage charisma to further causes they support. At intermission, they asked for donations to SOS Children’s Villages International, a global foundation that helps provide support for children in need.

“Peace, joy and happiness,” Jiyane said. “That is the message we always send to people’s hearts when they come to our shows. We bring the beat of the drum and we celebrate in song.”