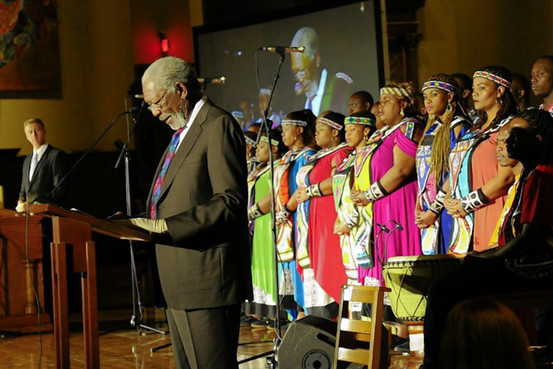 Despite the icy conditions, the pews of St. Paul the Apostle were full on Thursday night for a tribute concert in honor of Nelson Mandela. Recalling that Mandela’s Dec. 10 funeral was also dampened by poor weather, DJ Gareth Cliff, who hosted the evening with actor Morgan Freeman, remarked, “It’s almost as if, in his humility, Madiba doesn’t like too much of a fuss being made.”

Put together by the private New York arts club CultureHorde and benefiting the Nelson Mandela Foundation, the program took a historical approach to reflecting on the South African icon’s life. From lecterns on alternate sides of the sanctuary, Messrs. Freeman and Cliff took turns narrating Mandela’s 95 years. While Mr. Cliff recalled the Mandela’s progression from lawyer and activist to prisoner and then world leader, Mr. Freeman brought a piece of him to life on the stage with dramatic readings from writings that included his inaugural speech and a prison letter to his wife Winnie.

The evening’s joyous tone was set by a performance from the Soweto Gospel Choir, South Africa’s Grammy-winning ensemble. In their trademark brilliantly colored outfits, the group performed a spirited selection of hymns, gospel pieces and South African classics like “Asimbonanga,” which was written about Mandela by singer Johnny Clegg in 1987.

Interspersed throughout the tribute were anecdotes that revealed flashes of Mandela’s personality. Mr. Freeman knew Mandela for 20 years and portrayed him in the 2009 film, “Invictus.” He recalled presenting the film to him. “Illustrative of the true content of this man’s character, his only comment was, ‘Now perhaps people will remember me.'”

President Clinton had his own memories. Mayor David Dinkins, present in the audience, introduced him to Mandela at the 1992 Democratic National Convention, held in New York. He said Mandela became so close to the Clinton family that while Chelsea was studying at Oxford, he called her frequently to check in.

Mr. Clinton’s address echoed the Nelson Mandela Foundation’s call to continue with Mandela’s work. “We are living in an interdependent world. All that remains is to define the terms of our interdependence,” he said. “The only way they’ll be defined in a positive way is if we can reach across whatever divides us and the only way we can do that is if we are free. The greatest free man I ever knew should have his legacy sustained as long as the rest of us can help it to stay alive.”

For the choir’s final number, jubilant performers danced into the aisles as the audience clapped. Mr. Freeman was plucked from his seat, led onto the stage and urged to dance along. He didn’t disappoint.