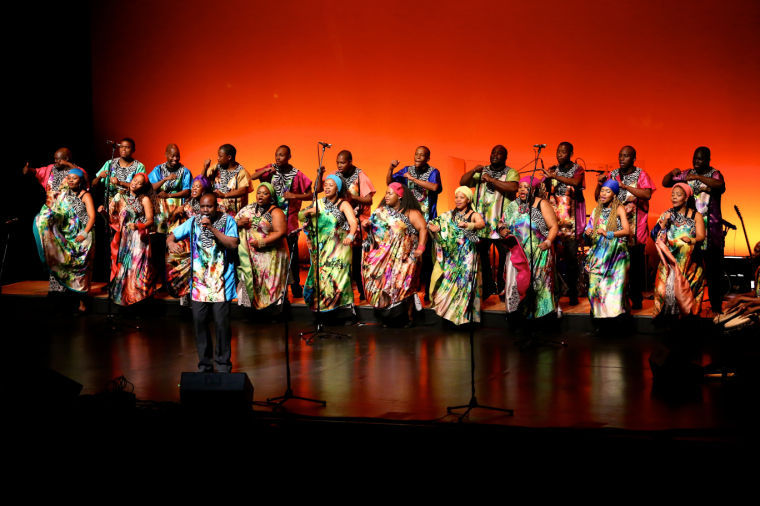 The two-time Grammy-award winning Soweto Gospel Choir brought the music and culture of South Africa to the Lyell B. Clay Concert Theatre Tuesday evening, supplying those in attendance with upbeat, energetic tunes to liven up the beginning of the work week.

Dressed in traditional South African attire, such as silk, flowy shirts for males in bright colors to robe-like dresses with brightly colored patterns and floral print designs for the females, the group took the stage and immediately wowed the audience. Their energy was evident from the moment the lights came on.

With 10 females in the front row and 12 males on a back riser, the group began as a full choir with an upbeat version of “Hiyo,” a Mthate traditional song and displayed incredible vocal ability and chilling harmonies to the audience.

A female member of the group came forward after the first song to greet the audience and explain the group’s purpose. She said the group would be collecting money for AIDS orphan organizations in the South African area at the end of the show. The woman also said the group was truly honored to be touring the U.S. After mentioning that last season was the group’s 10th anniversary, she expressed her love for the group and the fan base they acquired.

“We look forward to you being with us for another 10 years,” she said.

She also said the show would be dedicated to the former South African President, Nelson Mandela, who passed away earlier in the year.

“He has made us proud to be South African,” she said.

With one particular song by Johnny Clegg, “Asimbonanga,” the group paid tribute to Mandela through lyrics which mean, “We didn’t see all that Mandela went through.” They sang the second half of this song in English, providing a deeper understanding for the audience.

The group then began their second song, “Ziyama’umelusi,” another traditional number, which featured soloists from the group. Throughout all of the songs, different members of the group came forward to showcase their individual talents, whether that be singing, dancing or playing traditional South African instruments. By focusing on different members of the group, it actually gave the group a more family-like feel. They are absolutely comfortable letting other group members shine.

The changing of the tempo with simply voices alone was probably the most impressive aspect of the night. In songs such as “Libala Kuye,” “Calvary” and “Bridge Over Troubled Water,” the group not only showcased their outstanding vocal ability – which could honestly hold a candle to Mariah Carey or Whitney Houston – but also their ability to change tempo and sing in a group.

By listening closely to one another and practicing for years, the group is able to change tempo in the middle of the song from an upbeat rhythm involving clapping and dancing to a slower, more solemn tune carrying deep meaning.

The group played other popular hits, such as a rendition of Bob Marley’s “One Love,” Gene MacLellan’s “Put Your Hand in the Hand” and even Sarah McLachlan’s “Arms of An Angel.” By playing songs in English aside from the other five other languages, the choir was able to connect with the audience on a more meaningful level by allowing deeper understanding of the traditional material.

Many times throughout the performance, the choir brought the audience to their feet, clapping and swaying to the beat. The closeness of the group and the fun they had performing alongside one another transferred to the audience, providing a feel good, relaxing time for everyone in attendance.

This was one, exciting Unviersity Arts Series performance a few season ticket holders missed out on.