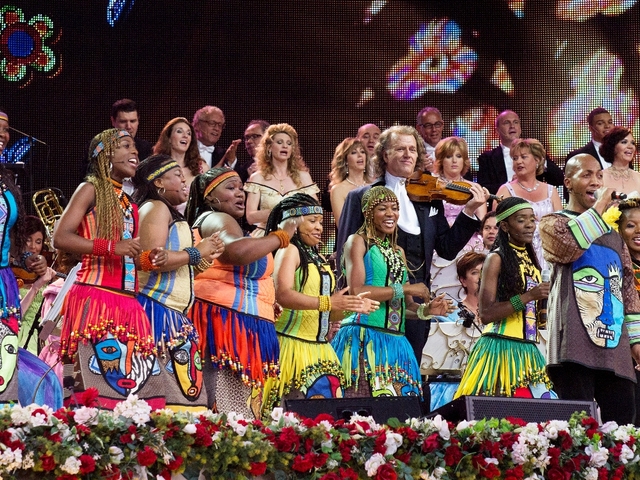 The world’s number one classical artist, André Rieu, is about to embark on his biggest SA Tour to date – by adding another show at the Coca-Cola Dome.

Demand to see the maestro and his Johann Strauss Orchestra perform their unforgettable, extravagant shows live in central Johannesburg for the first time, made it necessary to add an extra show on Saturday, the 18th of August 2012.

The Coca-Cola Dome in Johannesburg is one of the largest, most innovative domed structures of the modern world and with its capacity of 13,000, it will be the biggest venue Rieu has ever played in South Africa.

Rieu’s return to SA in August will be marked with the ultimate collaboration to date when he, his orchestra and guest performers will be joined on stage by the multi-award winning and National Treasure – The Soweto Gospel Choir. With an Emmy, two Grammys, three ‘associated ‘Grammys, three SAMAS and one Oscar nomination, The Soweto Gospel Choir is a perfect addition to create the most magical South African concert to date.

André Rieu is still topping the Music Charts, leaving behind artists like Justin Bieber, Sting and Michael Jackson. For anyone who has been to one of his memorable performances, it is easy to see why he remains one of the best-selling live acts in the world.

With arena performances in Cape Town, Durban and the first-ever performances in Johannesburg at the Coca-Cola Dome, thousands more fans will be able to experience the unique magic that they have come to expect from Rieu’s DVD’s and TV-specials: the maestro conducting his 60-piece Johann Strauss Orchestra and playing his world-famous Stradivarius violin to create a celebratory atmosphere, where fans are encouraged to get out of their seats and waltz in the aisles.

“My main goal, every concert, is for people to have an unforgettable night. I like to talk to my audience, interact with them and look them in the eyes. People can expect a colourful concert, with beautiful melodies, waltzes, surprises, balloons, the tenors and our lovely sopranos from South Africa, Australia and Brazil! I am really looking forward to visiting my fans in South Africa again.” said André Rieu.

Rieu has sold more than 30 million albums globally, and has broken all classical concert records, packing stadiums and arenas with more than 700,000 adoring fans each year. Over 100,000 South African fans have attended his sold-out tours over the past two years and still there is no slowing down for the King of Waltz according to sales for his upcoming tour in August.

Following on from the highly successful partnership between DStv and Hunta Live during the previous tours, DStv will once again be the proud presenting partner to these prestigious events in 2012. “The natural fit of the André Rieu brand and that of DStv is synonymous with world- class entertainment that resonates with a South African Audience”, says Graham Pfuhl, Marketing and Sales Director at DSTV.