The gospel according to Soweto

Elaine March 18, 2012 Articles Comments Off on The gospel according to Soweto 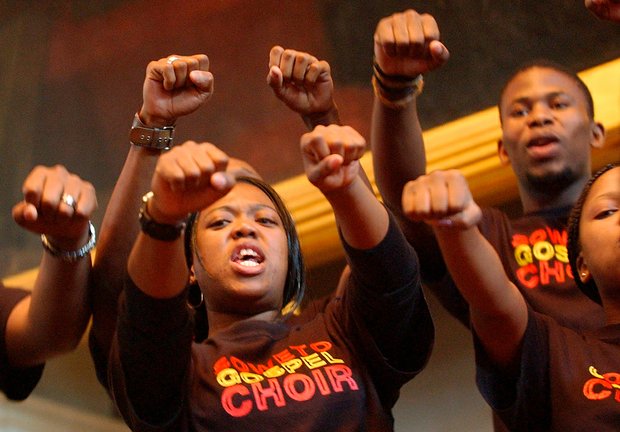 Members of the Soweto Gospel Choir perform as part of a 2006 community gospel celebration at Faneuil Hall in Boston.

A little piece of my heart will always reside in South Africa.

The summer before my final year of college, I wandered the country’s concrete jungles and grasslands for nearly a month. The purpose behind my presence was to assist various groups — workers in urban renewal projects, seminary students, church leaders — as part of a small collective from my university. As is often true, perhaps to the point of reaching cliché status, I received more from the experience than I ever could have given.

In the face of staggering odds, I witnessed a people wielding quiet resilience and determination as weapons against a pandemic-like occurrence of HIV and AIDS. With their wounds still open and hearts still fragile, I saw residents working to understand and own their new identity as a country of many races unified under one post-apartheid government. In every residence, large or small, and every city, developed or developing slowly, I came into contact with people whose understanding of what it meant to be bound to a place and a people far outweighed my own. Simple but weighty words such as justice, compassion, security and progress were redefined because of my sojourn.

On a trip marked by many remarkable sights and realizations, no images were more indelibly burned into my memory than those that came before my eyes in Soweto. The township is on the edge of Johannesburg, and the contrast between the two places is beyond striking. Someone standing on dirt paths amid shanty homes in Soweto can look to the horizon and see Johannesburg’s pillars of commerce and culture towering above. Never has the flimsy fault line between relative wealth and relative poverty been so identifiable before me, the juxtaposition of these two places like something of a sick joke or a slipshod error, just waiting to be resolved.

This week, the Soweto Gospel Choir will visit Columbia as part of the University of Missouri Concert Series, performing most prominently Tuesday night. The group exists as a proof to another sort of cliché or well-worn narrative, one in which flowers grow through concrete cracks, richness of character is cultivated in a place of abiding poverty and the poor of spirit really do have some intangible blessing to sing about.

Formed a decade ago, the group has transcended its origins while confirming there is not anything shameful about it. The choir has performed for heads of state — Bill Clinton, Nelson Mandela, Prince Charles and Desmond Tutu among them — performed at the Academy Awards and the World Cup, received a Grammy and collaborated with the likes of U2, Peter Gabriel, Robert Plant and Kirk Franklin.

To hear just a few bars of the group’s spirited singing is to have another word redefined — harmony. Yes, the requisite parts that make up a music score are there in rich, resonant accord. Covering a 2010 performance, Dallas Morning News contributor Manuel Mendoza wrote of the group: “The vocals were earthy but sophisticated. Rather than the soul shouting of Western gospel, Soweto Gospel Choir uses a subtler approach, weaving nuanced harmonies into the melodies. Vocal virtuosity was less the goal than creating an evocative sound.”

But there’s a harmony of spirit that shines through the sound as well. Group members sing as though bound by their shared humanity and common experiences; heaven and earth, past heritage, present struggle, future glory — all of these things are inextricably joined in their songs, whether gospel songs, folk standards or reimagining of modern pop hits, as if threads in a single garment.

One song in the group’s repertoire, “Masigye’bo (Let’s Dance),” is loosely translated into English as “Life is good in Soweto / Because we stay in love and peace / So let’s dance in happiness.” These words embody all that is embraced in Soweto Gospel Choir’s music — that life is good and bad everywhere, but there is much to hope in, much to rejoice about, always reasons to dance and sing. To hear the group sing this week will be, in one sense, to be taken to the township of Soweto but, in another, to find joy in the journey wherever you are.

Tuesday’s show begins at 7 p.m.; tickets are $14 for children and range from $19 to $29 for adults. Additionally, the group will perform a school show at 10 a.m. Wednesday with an admission fee of $7. For more details, visit www.concertseries.org.