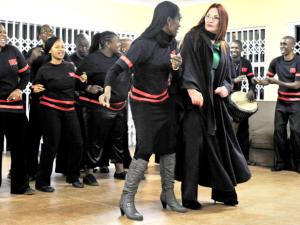 Nkosi Johnson was a profoundly brave hero who had dedicated his life to improving the lives of other children and mothers.

These were some of the sentiments conveyed by young and old at a memorial service held in Joburg last night to mark the 10th anniversary of Nkosi’s death.

A 17-year-old resident of Nkosi’s Haven said she admired his courage for standing up and forcing a government in denial of the gravity of the pandemic to finally take action.

“He’s a hero for all children… I’m here today living a better life because of him – we’re living Nkosi’s dream. It takes someone with guts to do what he did,” she said.

Judge Edwin Cameron said Nkosi had used his voice to convey a powerful message, and during his short life had done more than most people did in a lifetime.

“Nkosi was a testament to extraordinary courage… he had the thoughtfulness and strength of an adult,” he said.

All the children accommodated at the three Nkosi’s Havens lit candles while they sang Amazing Grace and remembered Nkosi and the hundreds of thousands of people who have fallen victim to HIV/Aids.

Photojournalist Anton Hammerl, who was killed in Libya, was also remembered.

Section 27 director Mark Heywood acknowledged there had been a “remarkable transformation” in the government’s response to HIV, particularly since Health Minister Aaron Motsoaledi had taken over the Health Ministry, but, like Gail Johnson – Nkosi’s adoptive mother – he said the country still had a long way to go.