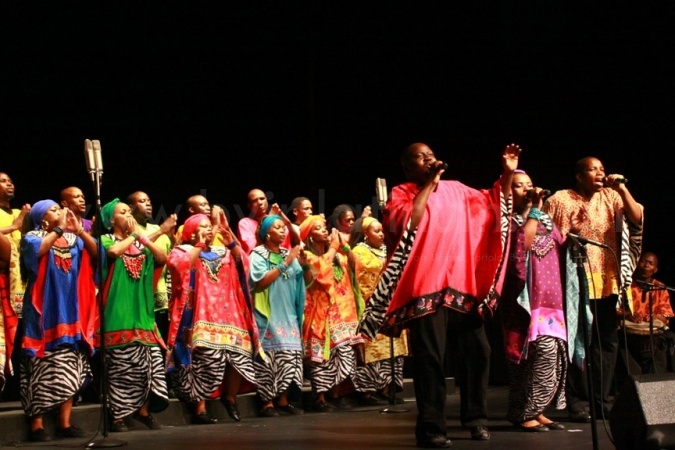 “It was awesome! The way they performed, everything was perfect and the good part is that it was all done without any instruments, no guitars. It was truly worth my money,” one of many patrons related to the BVI Platinum News following the Grammy Award winning Soweto Gospel Choir’s thrilling performance on Thursday.

The two sold out concerts with the South African group which was put on by the H. Lavity Stoutt Community College had patrons in the Auditorium enticed with their magnificent performance.

Dressed in colourful African wear, some 23 performers including men and women performed several of their gospel hits with powerful voices emanating from the auditorium, energetic dancing and drumming.

“We are honoured and excited to perform here today and show our music, dance and love for God and life. We will be doing a lot of traditional songs and songs we sing in church. We sing in praise of you,” one member of the choir said.

Members of the choir, rather than using instruments, made several beats and beguiling sounds using their mouth and hands.

All through the performance, patrons who were also dressed in African wear, were cheering and at the end of the show gave the group a standing ovation.

According to information provided by the college, the Soweto Gospel Choir was formed in November 2002 to celebrate the unique and inspirational power of African gospel music. The group rapidly became a multi award-winning sensation, drawing on the best talent from the many churches in and around Soweto.

Soweto is an urban area of Johannesburg in Gauteng, South Africa, bordering the city´s mining belt in the north. Its name is an English syllabic abbreviation for ” South Western Townships ” and points to its origins as a Black township under South Africa´s Apartheid regime.

The group is young and dynamic and is dedicated to sharing the joy of faith through music with audiences around the world. It performs traditional and contemporary music, adding its own unique feel and interpretation to both, and does so in six of South Africa´s 11 official languages.

The Choir in its entirety is a 52-member group and is often referred to as one of South Africa´s greatest musical gems.

In South Africa, its debut CD “Voices From Heaven” was nominated for a South Africa Music Award for Best Traditional Gospel. The CD has also garnered rave reviews, having reached the number one spot on Billboard´s World Music Chart within three weeks of its US release, debuting at Number 3.

The group’s next CD, “Blessed,” was released in July 2004, followed by “African Spirit” in 2007, through Universal Music.