Elaine December 12, 2009 Miscellaneous Comments Off on Must See Movie: Invictus 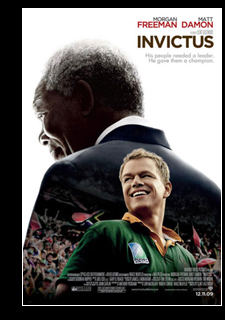 I just saw the movie Invictus today and am giving it two big thumbs up.  What a great story…and the music/score was awesome.

The song Shosholoza (the Choir sings a beautiful version of it in its African Spirit album) is featured predominately throughout the movie.

I am sure all fans of the Soweto Gospel Choir will enjoy the movie immensely–check it out!

Invictus is a 2009 drama feature film based on Nelson Mandela’s life during the 1995 Rugby World Cup in South Africa. Directed by Clint Eastwood, the film stars Morgan Freeman as the then South African President Mandela, and Matt Damon as Francois Pienaar, the South African team captain.[2] The story is based on the John Carlin book Playing the Enemy: Nelson Mandela and the Game That Changed a Nation.