Listen to the interview with Sipokazi. 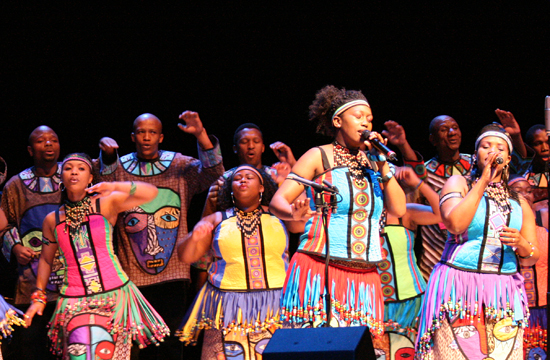 Dressed in vibrant costumes, the Soweto Gospel Choir blends the rich sounds of traditional African music with dance and a variety of musical genres — rock and hip-hop, and American gospel and R&B — and the combination has earned the choir legions of fans and awards from around the globe.

“The originality of our music is that it is songs we sing at our churches back home, songs we have grown up with, taught by our mothers and mothers’ mothers. And definitely not only traditional songs, but it is the kind of show that can cater for any kind of audience. Songs like ‘Amazing Grace,’ ‘Oh Happy Day,'” Sipokazi Luzipo, narrator and lead singer for the choir, said on a tour stop in Bethesda, Md. The choir is nearing the end of their three-month tour of Canada and the United States.

The 26-member choir can sing in 11 languages, including English, Xhosa, Zulu and Sotho, performing rousing a cappella numbers and sometimes with a variety of drummers and a band. In addition to the African spirituals, the group frequently covers Bob Dylan’s “I’ll Remember You” and Bob Marley’s “One Love.”

The choir also talks to their audiences about the fight against HIV/AIDS in Africa and encourages donations for their charity for African children, Nkosi’s Haven Vukani.

Founded in 2002, the Soweto Gospel Choir has also acquired notable fans, collaborators and boosters. They have performed for former president Bill Clinton and Nelson Mandela, and have sung with Bono, Diana Ross and Peter Gabriel.