Soweto choir gets taste of Thanksgiving

Elaine November 28, 2008 Articles Comments Off on Soweto choir gets taste of Thanksgiving 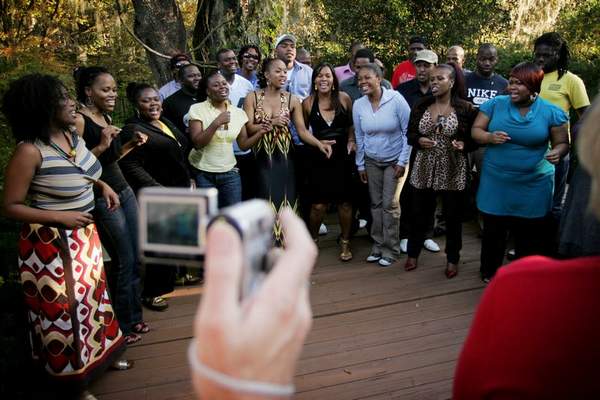 As the Soweto Gospel Choir hit the end note of the American national anthem, their impromptu Thanksgiving Day stage — a back porch in Gainesville — collapsed to raucous applause.

The South African choir, which has won two Grammy Awards among other accolades, is in Gainesville for two performances, but they spent Thursday eating a traditional Thanksgiving feast at the home of Michael Blachly, director of University of Florida Performing Arts.

“I think this is a lovely tradition,” said 28-year-old Honey Ncube, as he enjoyed his first Thanksgiving feast. “To me, it’s a wonderful thing, anything that brings together family.”

Ncube has been on tour in the U.S. for more than two months and said he misses his family in the urban city of Soweto, where he was born and raised.

His homesickness isn’t unusual to the 30 members of the choir who attended the dinner and have three weeks left before returning home.

“We’re homesick, and we want to go home,” said Nathi Hadebe, 30. “It’s good because at home we don’t have a holy-day equivalent to Thanksgiving and today we are home. It is a second home for us.”

Blachly said he invited the choir to his home, not only to share American culture, but to extend a home away from home.

“They had their U.S. premiere in 2005, here in Gainesville,” Blachly said. “Before they did National Public Radio, before they did Oprah, before they performed for Nelson Mandela, we had them here. And even to this day, they consider Gainesville to be their American home.”

One choir member wore a yellow shirt to Thanksgiving from that fateful, first American performance at the Phillips Center for the Performing Arts with “It all starts here” written on the back.

“It’s about bringing communities together, bringing our worlds together,” Blachly said. “Gainesville is a place that makes a difference.”

Thembisa Khuzwayo, 29, a dancer in tonight’s performance, said that having traveled much of the world she is accustomed to picking up new traditions.

“You have to learn to just adapt,” Khuzwayo said.

For example, in America, they introduce clips of songs into their traditional African music that the audience will recognize, such as “Amazing Grace” or “Oh Happy Day.”

The newest element of their performance — just kicked off for the holidays in Gainesville — is a grand finale of Christmas carols, Khuzwayo said.

Before Gainesville, the choir was touring the northeast, including New York, New Jersey and most recently North Carolina, where it snowed.

Ncube said Florida is a nice break. “It reminds me of home, actually, with the tropics,” Ncube said.

All told, Michael Blachly and his wife, Judy, hosted 45 people for Thanksgiving dinner with a grand finale performance on their back porch.

The choir performed the South Africa national anthem, which contains several of South Africa’s official languages, and then joined the other Thanksgiving guests in a rendition of “The Star-Spangled Banner.”

When the porch collapsed, Judy Blachly calmly proclaimed the choir had literally “brought down the house.”