A Soweto Afternoon in Morley

Elaine June 16, 2008 Articles, Audio, Photos Comments Off on A Soweto Afternoon in Morley

Audio clip: Adobe Flash Player (version 9 or above) is required to play this audio clip. Download the latest version here. You also need to have JavaScript enabled in your browser.

They’ve performed for presidents of the United States, sung for the pope, been on stage with stars like Bono and Queen, and apparently Nelson Mandela would like to join them. They are the Soweto Gospel Choir and, as a part of their world tour of more than nine months, they are in Perth and appeared on the Afternoons outside broadcast from Morley Galleria.

Shimmy Jiyane, choral director and founding member notes that he came to Australia when “I was dancing professionally, and then [in] 2000 when I joined the choir, I came back again and we’re still coming here.” 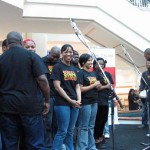 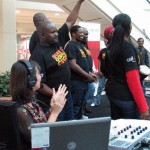 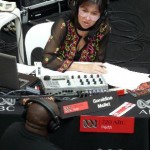 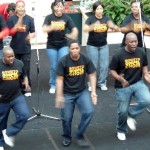 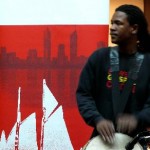 The choir’s global incarnation was properly established in 2002, Shimmy recalls. “It started when Beverly Bryer, Andrew Kay and David Mulovhedzi came to South Africa and watched the show Umoja. They liked what they saw and said ‘how about we get 26 members and we try and showcase the talent of South Africa because nobody knows about the gospel of South Africa’.

Singer Jabulile Dladla explains, “the gospel tradition in South Africa is big. Some churches believe in God, some believe in ancestors, so we combine together and come up with the [South African] gospel.”

Indeed, Jabu’s career started singing in church but “getting in the [Soweto Gospel] choir was like a blessing in disguise because we didn’t know that we’re going to achieve so many Grammys.”

Shimmy says their families are now used to the long tours that has helped earn them those accolades and awards, “but it used to be tough because they were not used to not seeing us for four months or five months.”

He says that the group themselves are like a family on tour that keeps the performers strong.

And, the warm welcome from crowds is reassuring as well. Usually the crowds will include some people dancing too. “Although sometimes they don’t understand the language because we’re singing in different languages, six of them!” Jabu says.

But, the language is obviously universal enough given the attention and love they have received the globe over, including on our Afternoons show!