Elaine May 23, 2008 Reviews Comments Off on Sydney Review 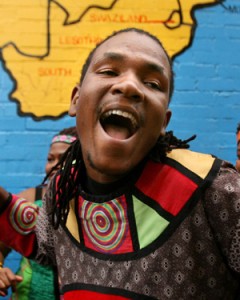 IF THE Soweto Gospel Choir sang only gospel its appeal would rapidly wane. The voices largely lack the virtuosic uplift the idiom demands. So this program, Spirit Of Africa, ranged farther afield, astutely devised to steadily intensify, until much of the second half was a whirl of colour and energy; of acrobatic dancing against irrepressible grooves, and singing that was disciplined and brimming with enthusiasm.

This was a 27-member version of the South African choir that was formed in 2002, and has Desmond Tutu as its patron.

From within those ranks was drawn a band comprising guitar, keyboards, bass and drums, and two members who danced and played percussion. The latter pair featured in a segment called The Canteen, in which cutlery, crockery and glassware became the instruments in a highly entertaining and rigorously rehearsed comic percussion routine.

Standing out among the singers was the contralto Sibongile Makgathe, who hoisted a modest arrangement of Amazing Grace to a much higher plane in a voice dripping with soul.

The rounded warmth of the basses Vusumuzi Madondo and Goodwill Mandlenkosi Modawu (who happened to double up as the band’s crisp drummer) was also notable, including on This Little Light of Mine.

It was a pleasure to hear the work of the wonderful South African songwriter Vusi Mahlasela represented in River Jordan, although the decision to incorporate the wet and overwrought World In Union was a serious lapse of taste.

However, the abiding memory will be of the stirring collective sound echoing the vibrancy of the costumes, and moving us all a little closer to the celebratory spirit of Africa.

The plea for peace and unity carried a particular poignancy, given recent events in the choir’s homeland.