Sentimental journey from Soweto to Sydney

Elaine April 23, 2008 Articles Comments Off on Sentimental journey from Soweto to Sydney 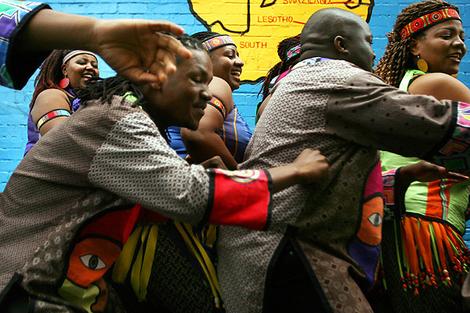 Sipokazi Luzipo was rejected from the South African version of Popstars because she wasn’t the “right shape”, but six years later, she has reached musical heights that leave reality TV music competitions for dead.

Singing with the Soweto Gospel Choir, the 24-year-old has toured the world, performed onstage with Beyonce and Queen, won two Grammy awards and has reduced the choir’s biggest fan, Oprah Winfrey, to tears several times. “It’s even better than Popstars,” Luzipo said with a broad smile.

The choir are in Australia for a 10-week national tour, bringing their infectious blend of gospel music and vibrant African rhythms to every corner of the country, starting in Cairns tomorrow.

If the performers were tired from their trip, they weren’t showing it. As soon as they donned their colourful costumes for the Herald camera, the women shook their bead-adorned hips, the men started clapping and their famous voices soared.

It’s an energetic, joyful noise that has caught the ear of several of the world’s biggest names in music. The choir has opened for the Red Hot Chili Peppers and has recorded with Bono. Winfrey asked them to perform at her New Year’s Eve party in Sun City in 2006, and they got to mingle with stars such as Chris Rock and Mary J. Blige.

Thando Jiyane recalls Winfrey’s reaction to their first rehearsal: “She’s head over heels for the choir … When she arrived she was blown away by the first note. She was crying by the end.”

The incredible popularity and critical acclaim the choir has achieved is changing perceptions of Soweto. Once synonymous with the suffering and brutality of apartheid, the township is increasingly associated with the famous choir’s joy and passion.

According to Shimmy Jiyane, one of the founding members, that changing perception reflects the transformation of his home town. “Today it’s

a happy place,” he said. “People have grown, people have forgotten about all the racist things that have happened to us.”

This is a sentimental tour, because the choir’s first overseas concert was at the Sydney Opera House in 2003. Shimmy Jiyane recalled : “They didn’t get up and dance like at home, but you could see the happiness on their faces.”