Soweto choir’s gospel with a difference

Elaine April 22, 2008 Articles Comments Off on Soweto choir’s gospel with a difference 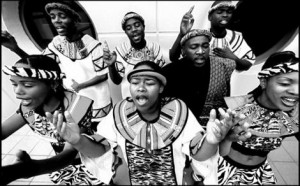 The Soweto Gospel Choir, which is currently touring Australia, sings gospel but with a difference.

Don’t expect your usual American-style gospel singing. These 26 singers, percussionists and dancers perform African-style with traditional songs in African languages including Xhosa, Zulu and Sotho as well as English and their own versions of Bob Marley and Bob Dylan songs.

While visiting South Africa the amazing and colourful church choirs were spotted by Australian theatrical producer and concert promoter Andrew Kay and he then worked with South African Beverley Bryer to set up the Soweto Gospel choir in 2002.

Members were auditioned, coming from the many churches and communities in and around Soweto for the choir, directed by choirmaster David Mulovhedzi.

It first performed in Australia in 2003, and this is its third visit with performances all around the country.

It now tours internationally 10 months of the year, while back home another choir performs for corporate and private functions.

On a cold and rainy Sydney morning, despite meeting in an African restaurant, three members of the choir seemed homesick while they spoke about the “rainbow nation” they say they are very proud of as they gave tips for tourists wanting to visit.

Another choir member Shimmy Jiyane suggested tourists first visit Soweto when they get to South Africa, going first to the Hector Pieterson memorial and media centre. (Hector Pieterson, age 13, was one of the first students to be killed during the 1976 Student Uprising in Soweto. He has since become a symbol of youth resistance to apartheid.)

All three suggested they visit Capetown, Devon, the former homeland of Venda, Sun City and Kruger National park and also in downtown Johannesburg the Market Theatre in Newtown to see the work of local artists.

They all believed it was “very safe” for tourists to visit their country.

“South Africa’s a changed place,” Jiyane continues. “You’ve got white people living in Soweto and white people in different parts of South Africa… Everybody can go there and enjoy themselves safely without fear of getting mugged.”

The choir has been heralded as the most exciting group to emerge in world music in recent years and has won two Grammy Awards.

This African Spirit tour is said to celebrate the strength of the human spirit and captures the beauty and passion that is Africa.

Its repertoire reflects some of the history of South Africa, ranging from the traditional African gospel song Sefapano to a new interpretation of Bob Dylan’s I’ll Remember You as well as Bob Marley’s One Love “mixed” with the South African song Avulekile.

After the concerts the choir collects money which it contributes to help AIDS orphans in South Africa.

In 2004 it set up its own charity foundation in association with the established AIDS charity, Nkosis Haven.

It’s raised almost $US1 million ($A1.06 million) from audience donations and last year fed, clothed and housed over 600 orphans.

The third choir member Thando Jiyane says many older women voluntarily help AIDS orphans by housing and feeding them, with no government support, and the money the choir raises goes to help them.

She says one woman had 27 kids living in her four-bedroom house in Soweto.

“She tries to feed them but it’s not easy,” Jiyane says. “We buy food, we load it in a truck and we go and play with the children.”

Another choir member also has his own foundation, the Rocsa Foundation, helping 68 children, in Florida, Johannesburg.

Despite the monumental problems associated with AIDS, the three choir members have hope for the future, believing the increased education in schools such as the Love Life youth program will lead to an “AIDS-free generation”.

“We have to push awareness in the young kids that they hold the future,” Thando Jiyane says.

The choir has sung on numerous occasions for Nelson Mandela, was the guest stars at Oprah Winfrey’s 2007 New Year’s party at Sun City, performed for Bill Clinton and sang Happy Birthday to its Patron, Archbishop Desmond Tutu.

In 2007, it won its first Grammy Award for Best Traditional World Music Album (for its second album Blessed) and won its second for the same category in the 2008 Grammy Awards (for its third album African Spirit).