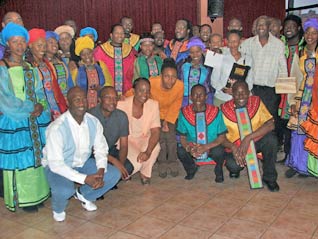 FOR the past seven years Siphiwe Msimango has been bringing people from Soweto to Joburg’s theatres to experience the joy of live performance.

And Msimango was honoured by the Johannesburg Civic Theatre on Saturday, 22 September for his efforts to introduce people to the theatre world, right after the Soweto Gospel Choir’s African Spirit concert.

“It makes me feel so good to see people that I have introduced to theatre, come on their own without me being there,” he said.

Msimango works as a volunteer at Chris Hani Baragwanath Hospital in Orlando, Soweto. “I work closely with the children with cancer at the hospital,” he explained.

As a volunteer on the children’s cancer ward, he has brought several actors, musicians and TV personalities to visit the sick children. “I have had the privilege of giving these children a hope in life and it gives me joy to see them happy.”

The ceremony was organised by the Soweto Gospel Choir and the Johannesburg Civic Theatre, taking place right after the choir’s performance at the complex’s Nelson Mandela Theatre.

“We would like to encourage Msimango to continue his efforts to bring people to the theatre, especially those less fortunate,” said the Civic’s chief executive, Bernard Jay.

African Spirit
But before the ceremony, the sublime, 52-member choir sang. Opening with the traditional Zulu hymn uJesu Ungowethu, the choir approached the stage. This was followed by the English version of the song, He is our Jesus.

During the performance, choir members introduced songs and explained why they were chosen for the African Spirit concert. “These songs have been chosen because they have an African connection and to give praise to God,” said Rebecca Nyamane, one of the choristers.