Blessed to be a witness to voices from heaven

Elaine February 27, 2007 Photos, Reviews Comments Off on Blessed to be a witness to voices from heaven

With the possible exception of Cuba, one could make a legitimate argument that no other nation on Earth expresses its inner collective soul through music as vividly as South Africa. A powerful case in point was the highly anticipated return of the Soweto Gospel Choir at the Hummingbird Centre on this late February evening. 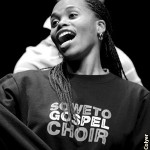 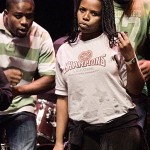 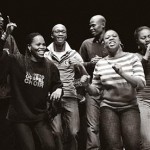 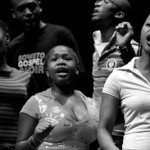 Arriving a half-hour before the concert, I was immediately gripped by the feeling that this was not merely a concert, but a human gathering and experience on a grand scale. Rarely if ever have I seen a truer reflection of Toronto’s multicultural humanity. After a foray for food and water, I went upstairs to the balcony lobby where the Toronto Children’s Concert Choir was performing a delightful concert; strangely, I heard them much more clearly after returning downstairs.
It was finally time to make my way down to the orchestra section for the show. The lights dimmed, the drums rolled, and the Choir made its way onto the stage — dressed in brilliantly coordinated and tribally symbolic Technicolor with the women wearing zebra-patterned skirts. After the brilliant opening number, the Zulu spiritual “Hlohonoloftasa”, Sipokazi Luzipo took centre stage with her booming yet beautifully cadenced alto to introduce the choir and the music we were to hear in the first set. Immediately and with infectious joy, she spoke to South Africa’s pride in its still-nascent democracy and the Choir’s view of itself as a musical ambassador for the country.

And thus this festival of the human spirit had begun. Voice, colour, rhythm and dance united as one. three- and four-part harmonies carried with stunning richness and texture throughout the concert hall. Every single soloist possessed supreme talent and their own unique vocal stylings, adding a spirit of improvisational energy to what is by definition a highly orchestrated performance. Some of the most impressive songs were: “Lelilungelo Ngelakho”, from Ladysmith Black Mambazo which I have now had the comparative pleasure to hear performed by South Africa’s two foremost vocal supergroups; “Weeping”, the international anti-apartheid anthem with Shimmy Jiyane’s remarkable tenor; “Asimbonanga/Biko”, a tribute to slain activist Steve Biko made famous by Johnny Clegg and Peter Gabriel, led by tenor Bongani Khumalo and soprano Nomvula Gabashe; and “Avulekile Amasango” which integrated the timeless Bob Marley classic “One Love”. The set concluded with the Sotho anthem “Siteng Sediba”, with a furious djembe volley to turn the lights down low.

After a necessary moment of reflective and quite profound solitude outside during intermission, it was time to barely make it back in time for the second set; which opened with a jaw-dropping dance-and-drum segment. A personal highlight was “Tshepa Thapelo”, written by Ladysmith founder the late Joseph Shabalala, and known around the world as the African pulse of “Homeless” immortalized on Paul Simon’s Graceland. The choir brought the house down when they got funky with “Khumbaya”, featuring choirmaster Lucas Deon Bok playing a slap-bass that would have done Marcus Miller proud.

Then it was time for a two-song journey into the heart of American gospel, which along with jazz and blues, has been so instrumental in the evolution of the South African stylings. The mellifluous bass of Vusi Madondo, the most impressive of the male singers in my opinion, carried “Swing Down”, then came a musical memory for a lifetime that requires a little comparative reminiscing if you’ll be so kind as to indulge.

In 1995, I saw Victor Lamont Wooten play “Amazing Grace” entirely using harmonics on the electric bass during a Bela Fleck & The Flecktones show at the Toronto Jazz Festival. That had been the most memorable rendition of the essential song I had ever witnessed — until this night towards the end of the second set when the Choir unleashed their truly epic version. At the end of the first male solo verse, the gorgeously soulful and nuanced bass of Nathi Hadebe, the next vocalist in the procession, Joshua Mcinake, took the front of the stage and high-fived his predecessor’s hand in praise. The song just kept building from solo verse to chorus; each soloist visibly moved and inspired by this moment of moments for most any gospel singer.

Sipokazi Luzipo’s alto on “Holy City” was one of the female vocal highlights of the show, with Den Bok’s slap bass once again at the heart of the encore “World in Union”. Those three words sum up the essential spirit of this magical evening; the bravely beautiful people who sang, danced and drummed for us and those fortunate enough to bear witness to these voices from heaven.

On the way home I had fond recollections of good friend Lee Hirsch’s Sundance-winning documentary Amandla: A Revolution in 4-Part Harmony, the story of how music and dance kept the spirit of black South Africa alive during apartheid’s 46 years of terror; and eventually played a key role in bringing down the odious regime. I will certainly be watching it again in the near future, and recommend it to anyone interested in a similarly soul-stirring exploration of the singular power of South African music and song.