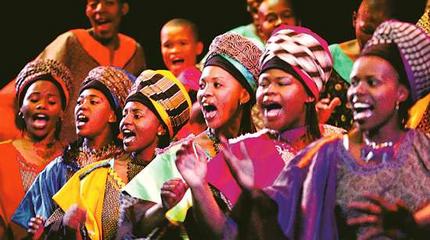 The audience’s first glimpse of the Soweto Gospel Choir comes almost as a shock — a shock of vibrant colour and movement, as the stage (which remains cloaked in darkness while the choir takes its place) suddenly comes to life with the first few bars of song.

Twenty-five performers stand dressed in dazzling, multi-hued costumes inspired by various South African tribes. As they sing, their bodies begin to move, swaying in unison to emphasise the rhythms inherent in their voices and accompanied by expressive gestures that underline the story and sentiment of each song.

Following the call-and-response pattern of traditional African music, singers take turns to step forward and lead the choir, revealing voices that are as individual and distinctive as their costumes — rich and full-bodied; sweetly melancholic; youthfully exuberant. Most of the repertoire consists of traditional and contemporary South African songs and spirituals, although there are a handful of international gospel and pop tunes such as Oh Happy Day, Bob Marley’s One Love and Peter Gabriel’s Biko.

The choir’s current tour follows the release of their second CD, Blessed, which celebrates the 10th anniversary of democracy in South Africa.

At Friday night’s Melbourne concert (they also performed Saturday), narrator Sipokazi Luzipo introduced several songs by making reference to the apartheid era, noting that she and her colleagues indeed felt blessed to be able to perform their music on a world stage.

The choir has also grown enormously in terms of experience and professionalism since their first visit to Australia in 2003. This time, there wasn’t a hint of nerves among the young performers, who revelled in this celebration of their cultural and spiritual identity.

Some of the singers doubled as musicians, drummers and dancers, but all the performers contributed to the music’s visual and percussive impact. Using a combination of foot stamping, finger snapping, syncopated claps and tongue clicks, they buoyed the music on a sea of shifting rhythms, punctuated by whistles, whoops and hollers.

Choir director Lucas Deon Bok led the ensemble passages with deft precision, but didn’t attempt to corral the singers’ natural ebullience. On the contrary, Bok’s boundless energy encouraged the performers to let their joy spill across the stage and into the audience so that we became willing members of the congregation. Hallelujah!