African choir sings its message to the world

Elaine August 10, 2005 Articles Comments Off on African choir sings its message to the world 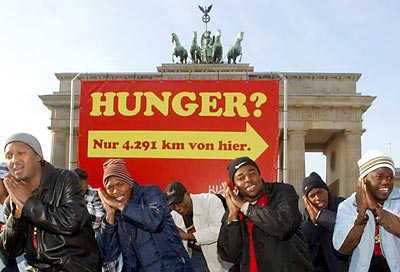 Three years ago a group of singers known as the Soweto Gospel Choir emerged from the ghettos of South Africa.

Performing a mix of traditional African gospel and popular standards, the choir quickly became the world’s number one gospel outfit.

And instead of using their fame to escape the problems of Africa, the choir members are using it to help children affected by AIDS.

“Sometimes they go around with tears. That’s not just because of sadness, but because of the joy of the music and some people go inspired,” Soweto Gospel Choir music director Lucas Bok said.

“A lot of people get a different view about South Africa and Africa as a whole because we come in and we’re giving a message of peace, a message of joy.

From the poverty of South Africa’s townships to the beautiful beaches of north Queensland, the Soweto Gospel Choir is preaching its message.

The choir is made up of just 32 singers from churches across South Africa although 1,000 people auditioned.

The group brings the gospel music and traditional dance of their childhoods to the world.

“When you grow up, you are told how to sing ’cause parents sing old tunes at home and that’s what they used to sing,” Jiyane said.

Bok added: “I love the dancing because it’s very African, it’s very traditional, it’s very something, it reminds you of home totally.

“The guys, especially, all they do is dance. They will teach you and bigger brothers. It keeps you connected to them and keeps you proud of who you are.”

The choir become an international success with sell-out tours in the US and Europe.

Its debut album topped the Billboard world music chart in the US last year.

For the members, that success has been a golden opportunity to escape the grinding poverty of South Africa’s township life.

“There’s no job back home, so I would be maybe struggling to get something because when we go back home people are just like, ‘Oh, you are lucky because you are still working. We are struggling back home here, you know’,” singer Jeho Fata said.

“So it’s been a blessing for us to have this job.”

Now the Soweto Gospel Choir is helping battle one of South Africa’s most pressing health problems.

It is using money raised during its overseas performances to fund a charity that feeds and clothes some of the half-a-million children in their home country orphaned by AIDS.

“We are actually suffering the brunt of it and seeing it and relatives and people you know, who are actually dying of it and it’s hurtful,” Bok said.

“But at the same time, we try to bring awareness as well. To make a difference in our own country as young South Africans.

“It’s about time that Africans do something for Africa as well.”

Inspired by 12-year-old AIDS activist Nkosi Johnson, who died of the disease four years ago, the choir not only raises money, but members take a hands-on role in charity work when they are back home.

“When we buy the groceries for the orphanages, we also perform at the same time for them,” Fata said.

“So sometimes they join and sing with us because we also sing the songs that they know back home.”

Fata says sometimes the children “sing the songs better than us, those notes, and tiny voices”.

Given the choir members’ empathy with children, it is appropriate they start their Australian tour in north Queensland with a performance for youngsters from the local Aboriginal community.

“The singing was something like I’ve never seen before and the dancing was awesome,” Tia, an Indigenous child, said.

The concert culminated in a musical exchange.

“For little kids to pay attention is not just easy, but they paid attention and it’s something that really fulfilled my heart today.”

After touring Australia, there will be no respite for the choir.

It will head for Europe, determined to spread the message as far afield as possible.

“A true reflection of South Africa, that’s what we really want them to go away with,” Bok said.

“To understand South Africa, to understand the kind of people we have and to also know that music gives life.

“Music is something that you can always relate to, you can always go back to. It’s a universal language. I want them to go inspired when they leave our show.”