The Soweto Gospel Choir visited WRAL-TV while in the Triangle as part of their 2005 United States performance tour and managed to work an impromptu television show taping into their busy schedule while they were here. 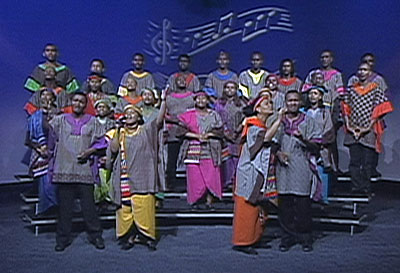 The Soweto Gospel Choir performed at Duke University’s Page Auditorium on Tuesday, February 1 at 8pm. While in town that day, WRAL News Producer Scott Nagel booked them for an appearance on the Noon News. WRAL News Director Spencer Jenkins saw the schedule that morning and decided to take advantage of the opportunity.

That week’s scheduled taping of Spiritual Awakening, WRAL’s weekly gospel music program, had been cancelled due to a problem with the group who had been booked to perform. Jenkins, who works with WRAL-TV Associate Producer Dona Anderson on the show, decided to pursue taping the Soweto Choir as a replacement.

“Spencer had it all set up by the time I came in to work Tuesday morning. He had the crew, the studio, the host, everything, ready to tape immediately after the Noon News, just in case the Choir agreed to do it,” said Anderson. They agreed, and promptly at 1pm, began taping an episode of Spiritual Awakening.

“They were professionals,” said Anderson. “They just knew exactly what to do.”

That episode of Spiritual Awakening aired on WRAL Sunday, February 6th at 6am, and again on WRAZ at 8am. Due to popular demand, an encore presentation will air on both stations February 20th at the same times.

The Soweto Gospel Choir is a vocal ensemble from South Africa. Their performances include tribal, traditional and popular African gospel in 8 different languages. They began touring internationally in 2003 and just began their first US tour in 2005.