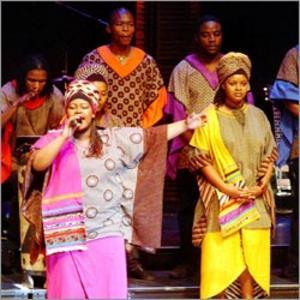 Sure, black Americans “Africanized” white protestant hymns to invent spirituals and contemporary gospel . But leave it to a native ensemble to prove how much more “African” inspirational Christian psalmody could be.

On February 4 the 24-voice Soweto Gospel Choir gave Carnegie’s Zankel Hall a program of polyphonic praise and worship not only of God (“Amazing Grace”) but of feminine charm (“Malaika”) and their national liberation struggle (“Nkosi Sikilele”). Wide-ranging multilingual material and strong female soloists prompt comparisons to earlier SA exports like Miriam Makeba and Letta Mbulu. Despite having a band, music director David Mulovhedzi allows his singers only minimal accompaniment—often only traditional hand drums or a pennywhistle—both live and on their new Shanachie CD, Voices From Heaven. SGC SGC are one of many gospel groups Mulovhedzi has groomed since 1986, and like Kirk Franklin, his musical ideas, groups, and protégés keep evolving in interesting ways.

But it was young soprano Lehakwe Tlali who unexpectedly peaked the evening with her unique timbre and luminescent presence. She sang “Mudimo,” a haunting melody with a timeless lyric thanking her Creator, in Sotho—one of her nation’s 11 tribal dialects. “Mudimo” was a perfect example of the happiest way an African sensibility and Christ’s good news can blend—in the fervent singing style of a girl expressing gratitude for the gift of life itself.