Once a byword for struggle against apartheid, Soweto is now firmly on the tourist trail. As it celebrates its centenary, Gwyn Topham visits the townships 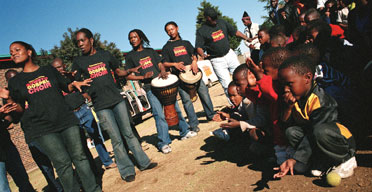 Of all the places to get a sense of deja vu, Soweto would have been unlikely to top my list. And yet the landscape here felt oddly familiar, presumably from faint memories of old TV news footage.

At the Baragwanath taxi rank, the teeming transport hub for a sea of minibuses that ply the roads to Johannesburg, we met up with Soweto resident David Mulovhedzi, who was able to explain just why we might well have seen these streets before. As we drove on, he pointed out the locations of terrible recent history: schools whose pupils were gunned down in the 1976 uprising; hostels from where the secret police-funded Inkatha attacked ANC supporters to destabilise the emerging political consensus. We also passed Desmond Tutu’s church – a focal point for resistance to apartheid in the days when gatherings were otherwise banned.

Mulovhedzi’s life here has been marked by faith and music: he is now director of the Soweto Gospel Choir, currently touring Britain. They are an exhilarating face of a Soweto whose image has been transformed in the 10 years since the first free elections: from a place that few outsiders would want to visit, into South Africa’s number one tourist attraction.

How far things have changed will be underlined next month as Soweto celebrates its centenary, with events planned including the unveiling of a walk-of-fame style boulevard commemorating figures from the years when Soweto was a byword for struggle against the apartheid regime.

The centenary dates from the initial forced relocation of black workers who had come to work in the gold mines of Johannesburg. These early slum dwellings in Klipsruit were joined by many more when apartheid was brought into being; the name Soweto, an abbreviation of South Western Townships, was officially designated in 1963, although the word township barely conveys that it is home to an estimated 3 million people.

Even now that tourists are commonplace, visiting Soweto is an experience beyond the usual sightseeing. Most still tend to stay in Johannesburg rather than in the township itself, but there is an increasing quantity and quality of B&B accommodation (see below). Local tourism associations are campaigning to persuade visitors to “get off the bus”, to spend more time and money in restaurants and shops.

Guided tours remain the current norm though; there are few obvious landmarks. One you can hardly avoid seeing when driving in is the Orlando Power Station, itself a potent symbol of change. Its now disused twin cooling towers, which once pumped pollution over the townships while supplying electricity only to white suburbs, were last year decorated with huge, colourful murals.

Some historical sites already form a well-established trail, in the better-off Sowetan suburb of Orlando West, starting with the Hector Pietersen memorial. This monument is named after a 13-year-old victim of a police bullet in the 1976 schools uprising; in what became an iconic image of apartheid’s repression, another pupil was photographed carrying away his body. The accompanying museum is an essential place to visit for some eye-opening recent history.

Mandela’s meagre dwelling is open for tours, though it’s hard to cram more than a few people in at once. Most of the walls are now given over to photos and tributes: among the countless honorary degrees are Sugar Ray Leonard’s champion’s belt (Mandela himself was a keen boxer) and a formal apology from the state of Michigan for the CIA’s involvement in his persecution. Only the bedroom still retains the look of a home, with an eye-catching bedspread made of jackal furs, as befitted a man who was born, after all, a Xhosa prince. By the window is an oddly touching line-up of footwear, the Hi-Tec trainers he padded around in his early days of freedom dwarfed by ex-wife Winnie’s army boots.

Outside in the bright sunshine, it feels like any suburban road – almost a Ramsay St, but with more illustrious neighbours. Good restaurants have opened on the street – we stopped at Sakhumzi’s for drinks and ate excellent traditional African food at the lively Nambitha in the evening – and a nearby “shebeen” turned out to be almost disappointingly un-edgy. At the welcoming Dodi’s Joint, smokers are banished to the Lung Physiotherapy Room out the back.

In this relatively wealthy strip, you could almost be unaware of the poverty that still exists all around, were it not for a few entrepreneurial children begging (“Welcome to Soweto. Please make a donation,” asked one). But we saw another side of life in the townships when we joined the gospel choir on a visit to Sizanani, a project set up to help Soweto’s growing number of Aids orphans. It struggles to help nearly 200 children just in the immediate area, with many others on a waiting list. Dudu, at 14, is one of the oldest, and relies on it as a haven in the day where she can study and have lunch and supper. “They’re like a mum and dad,” she said, “everything’s here.”

The visit of the choir – bringing food parcels as well as songs – made it briefly something of a party atmosphere. Beyond this oasis of care though, Sizanani’s workers said, many of these children were looking after even younger siblings, in situations that often left them open to horrific abuse from adults elsewhere.

Such places aren’t necessarily on a tourist itinerary in any country; but despite the progress made in the decade or so since apartheid was abolished, the inequalities in much of South Africa are glaring; if race is no longer a legal division, the economic divisions are obvious. A great place to get a handle on the nation’s past, and to understand how places like Soweto came to be, is the excellent and harrowing Apartheid Museum. (This aside, the city of Johannesburg itself can – notoriously – be a less than enticing prospect. But there are places even beyond the rich guarded enclaves of Sandton that feel a bit more atmospheric and fun. Newtown’s Gramadoelas restaurant does excellent South African cuisine, with the Market Theatre and Kippies Jazz Bar a few doors down.)

The history gives a bit of bite to the country’s cultural events too. We travelled south to Grahamstown in the Eastern Cape for the annual National Arts Festival (and its fringe), 10 days of various performances every July. Like a scaled-down Edinburgh, this small university town also plays host to a fair number of student productions and atrocious stand-ups among the gems – but there’s perhaps more fascination in watching a nation warily re-enacting and redefining itself than in the slicker shows of Edinburgh. Here, there was plenty of resonance in prison chronicles and even light reworkings of Zulu folk tales.

We also watched some more literal histories, such as a play retelling the Soweto students’ revolt. It was astonishing to think that the laws, repression and cruelty it depicted were so recent; equally astonishing that the fury isn’t greater, especially when you can still walk out of the theatre today and see the townships on the hill away from Grahamstown’s well-off centre. In a Soweto bar, Greg, a local guide, told me: “Given what happened in the apartheid era, you might expect people to be angry with white men, but we have moved on, buried the hatchet.” It was a remarkably generous assessment – one that might have been inspired by Mandela’s own policy of extreme forgiveness and reconciliation – even if you wonder how many people truly feel that way. While more and more foreign visitors reach Soweto, few white South Africans, by most accounts, have made the journey.